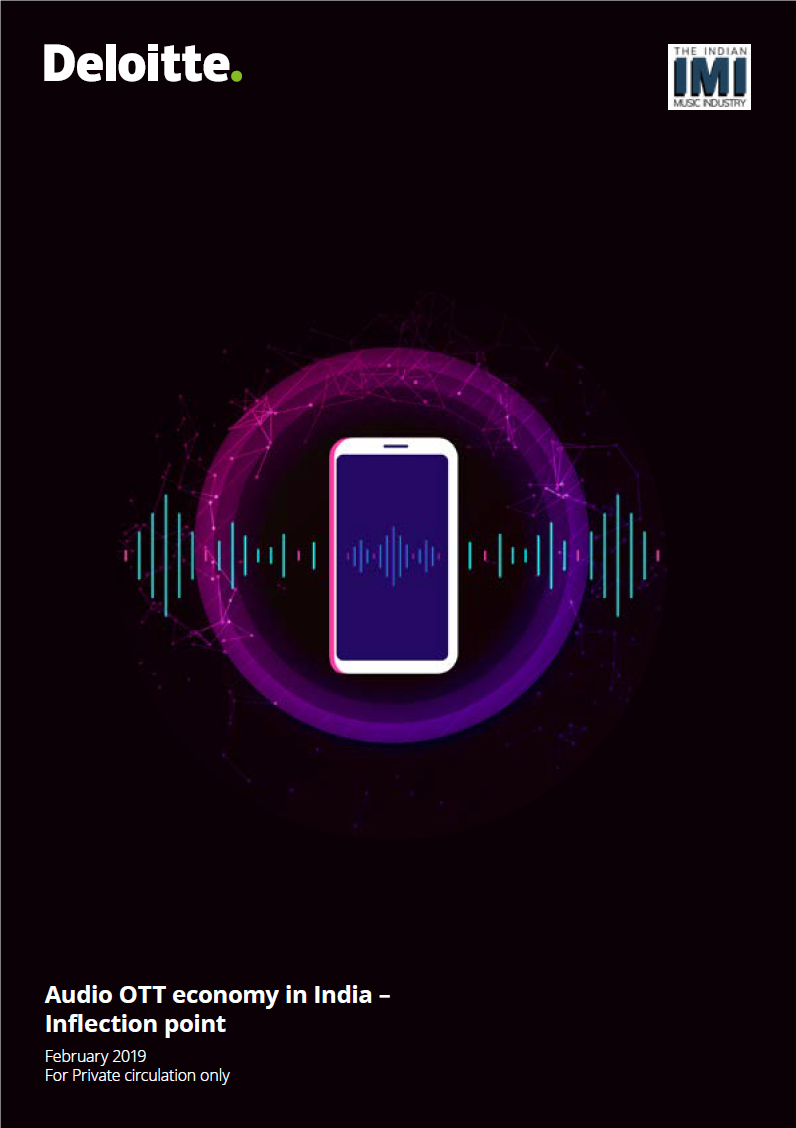 February 12, 2019, Mumbai: A report on the growing Audio OTT industry values, the Indian OTT market at USD 280 million, with revenues from the audio OTT industry contributing to 67% of the total recorded music revenue in India. Audio OTT includes delivery of digital music content over the internet to the consumer by independently hosted applications that procure content from music labels, publishers and other distributors. The report, based on a study by the Indian Music Industry (IMI) and Deloitte shows audio OTT poised to take off on the back of a digital music explosion in the country.

Speaking at the launch of the report, Mr. Blaise Fernandes, President and CEO, The Indian Music Industry (IMI) said, “India is a music loving society with Indian consumers spending 21.5 hours every week listening to music, against the global average of 17.8 hours. Helping to satisfy this love for music is the audio OTT industry which is at an inflection point today. The launch of various Indian audio OTT platforms like JioSavaan, Gaana, Hungama, Wynk and Vodafone-Idea, as well as International platforms like Apple Music, Amazon Music, Google Play and the impending arrival of Spotify offer immense potential for the growth of the Audio OTT industry not just restricted to India, but across borders as well.”

Mr. Blaise Fernandes added, “If a Despacito can become a hit in India, if K-Pop can cross geographical boundaries, then the scope for music from India is infinite, with different regional languages poised to dominate local and international markets driven by the reach of the Audio OTT platforms. The report amplifies on all aspects of the Audio OTT industry including policy changes, potential trends and developments that will shape the future of the industry.”

The report also highlights the contribution of the recorded music industry to the growth of the audio OTT platforms with all major stakeholders from lyricists, music composers, performers to film producers, music, actively creating for and licensing content to the digital platforms to boost music consumption. The expected growth in smartphone users to 829 million in 2022 from just 404 million at the end of 2017, highlights a digital revolution, where an increasing number of people will shift to digital platforms to consume music. As at the end of December 2018, there were nearly 150 million music streaming users in India, while seemingly large are still only 60% of the online video audience. This indicates a significant growth opportunity with audio OTT platforms emerging as the preferred medium to consume music in the country, and the OTT market valued at over US$280 million in January 2018, poised to show strong growth in the next few years.

The report examines the various business models as the Indian recorded music industry moves ahead on the digital path. The writing is already on the wall with physical sales of CDs showing a steep drop from 35.5 million in 2013 to 0.4 million units in 2017. Audio OTT platforms will be a key driver of growth in the future – digital revenue has already shown an increase from US$ 74.4 million in 2016 to US$ 102.1 million in 2017. The report also examines the implications of piracy with US$250 million lost each year on account of piracy in India. It evaluates the anti-piracy measures in India by music labels, regulatory bodies, government, and other stakeholders to curb this major source of money leakage. India’s recent approval for accession and ratification of World Intellectual Property Organisation’s (WIPO) internet treaties to protect intellectual property rights of artists and content owners reflects the level of IPR awareness in the country. It examines successful initiatives in countries like China to curbs piracy and encourage more users to subscribe..

FDI and FII represent major sources of investment for the Audio OTT industry in India, with investors like Tencent, Tiger Global, Liberty Media and Xiaomi investing over US$300 million in the audio OTT industry. The report also examines the various challenges faced including piracy. There is a need for free-market licensing norms to help sustain the digital ecosystem, where content owners and creators are sufficiently remunerated, in order to sustain and encourage investments in content. It is then that India can take a major position in the global recorded music space.

The report can be read in full here.